As of 1 July 2020, Victoria saw a new set of occupational health and safety laws come into effect. The new legislation means that an entity or employer convicted of negligently causing death can face a $16.6 million fine while someone convicted as an individual could face 25 years jail time.

There is no doubt Victoria already had proficient occupational health and safety regulations before the amendment. However, the changes are designed to reduce the number of workplace deaths and to act as a clear deterrent to any individual, entity, or employer that isn’t meeting their occupational health and safety obligations. According to WorkSafe Victoria, the new laws are being used to send a message that negligent workplace death simply won’t be tolerated.

So, what does this mean for committees and do Victoria’s new workplace laws impact owners corporations?

1. Victoria’s new workplace laws and how they impact an owners corporation

From 2003 until July 2020, almost 4,000 Australians have died due to a workplace incident. While rates are higher across different industries, the Victorian Government introduced an amendment to the Occupational Health and Safety Act 2004 (OHS Act) via the Workplace Safety Legislation Amendment (Workplace Manslaughter and Other Matters) Bill 2019.

“Industrial law is a highly complex and frequently litigated area. It’s often confusing for those outside of the law because of the way it’s spoken about. For example, the new regulations often talk about the laws applying to “individuals and bodies corporate”. For many people in community living and strata, they automatically think the legislation is calling out owners corporations. Rather, in this context, bodies corporate means an incorporated group, company, or business.

“In saying that, an owners corporation is a legal entity and the manslaughter laws do apply to them because of this, but I think the phrasing makes this slightly confusing and alarmist for owners corporations,” said Tom.

“For example, your property has a ceiling issue — it’s sagging, cracking, falling apart, or showing signs of stress. This has been recorded, and there was a decision not to do anything about it. If the ceiling then collapsed and killed someone, this would be negligent. In such a case, it could be found to be manslaughter, and the owners corporation might face the $16.6 million penalty,” said Tom.

2. The new laws mean tougher penalties on existing duties under the OHS Act

While the new workplace manslaughter laws and their penalties are a sobering thought to any director, partner, or officer of a legal entity, they’re not entirely new. According to WorkSafe, the changes have not created any additional duties. Instead, they have just introduced tougher penalties on already existing duties under the OHS Act.

Owners corporations should stop, think, and check the risks on their property, including whether they are following the right steps to be compliant, and assessing what additional steps could be taken to mitigate any risks. Mitigating such risks is something PICA Group, as Australia’s leading property service provider, knows how to manage. It is from this necessity, Community Health & Safety was devised — an incident reporting and management service that helps owners corporations reduce risk, meet compliance, and maintain a duty of care.

$3 million owners corporation penalty can increase to $16.6 million and more

“The new legislation has primarily increased the punishment; the regulations already existed. Instead of a $16.6 million penalty, owners corporations previously faced a $3 million penalty when found guilty for breaching their duty of care.

“For owners corporations who already undertake all the right measures, they don’t have to worry about the new regulations. WorkSafe has said if you’re already compliant with your OHS duties, you don’t need to do anything different from 1 July. The warning is for those who don’t comply, the consequence could be much more severe,” said Tom.

“Owners corporations shouldn’t become too concerned about the changes because there are also thresholds that need to be met to achieve a successful workplace manslaughter offence. It would probably be unlikely, in an owners corporation setting, for someone to be found guilty and meet all these thresholds,” said Tom.

Kemps Petersons Legal believe owners should see it as a reminder of how important good management is to successful and risk-free community living.

“Proactive owners corporation or strata management is really important. A good manager helps direct the committee and owners to make sure they’re addressing their compliance requirements. Without a good manager, it can be easy to let things like fire compliance, legislatively mandatory certificates and checks, or urgent maintenance issues go unattended.

“A good manager can help guide an owners corporation so that their financials support regular property maintenance and checks. A proactive manager will help owners to keep their property running smoothly and avoid any issues or catastrophic events.

“What’s more, should an incident occur, the new regulations could impact managers too. While it could be a stretch, depending on how WorkSafe wanted to run their matter, it could be argued that the manager themselves is liable because they are an officer of the owners corporation. So, all parties involved in the common property, have a vested interest in keeping it safe and risk-free,” said Tom.

4. Make sure your contractors are certified and insured

Making sure contractors are appropriately certified and insured also feeds into the broader compliance picture. Establishing a common property worksite means both owners and the worker have obligations to make sure the work being undertaken is safe. According to Tom, owners shouldn’t underestimate the importance of due diligence when it comes to checking workers entering the common property.

“Good quality management, like PICA Group, provides services such as CommunitySelect for a reason. CommunitySelect vets and checks all contractors and workers to make sure they are adequately certified and insured. This is a key step to minimising risk if something was to go wrong. If your management doesn’t check your contractors for you, it’s worth putting in the effort to make sure you’re hiring the right people or moving to someone who does,” said Tom.

If you’d like to find out more about remaining safe and compliant, visit PICA Group’s Community Health & Safety page. If you would like affordable and specialised legal advice for your property, visit Kemps Petersons Legal. 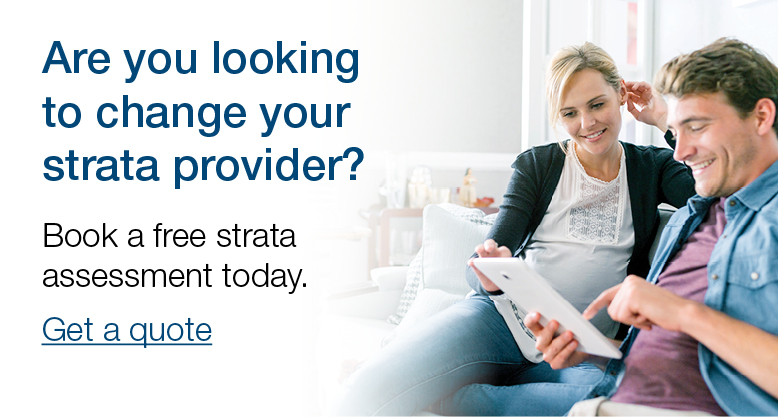 We care about what you have to say. Share your feedback here.